Call it a habit, call it an essential, fact is that Amira will be appearing in various Christmas concerts this year. On Saturday December 9th Amira will perform in Weert (NL) with the WGK (Mixed Choir of the city of Weert); One week later, on December 16th, Amira will appear during the Christmas concert of the Nijmeegs Mannenkoor (Nijmegen Men’s Choir), just like she did in 2015. 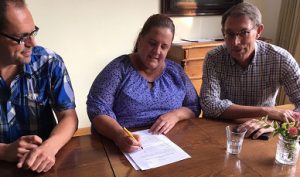 Amira’s mother Frieda signs the contract for the concert with the Nijmegen Men’s Choir.

Amira will donate the entire fee she receives for the concert on December 16th to her Gelukskinders Foundation to further support the charity work for the children of the townships in South Africa.

At present, no details abot both concerts are available other than the facts that the concert in Weert it almost sold out, and that ticket sales for the concert in Nijmegen will start mid August.

Amira’s Calendar will be updated with details on both concerts as soon as more information is available.